The Origin of My Hair Loss

Yes, baldness! But first, hair loss. I was losing my hair at the edges, and I thought I was going to lose my mind as a result of this.

You know that fresh well-defined look after your eyebrows have just been threaded well, and it looks like you just got a mini facelift? Well, I have always been a fan of micro twists, also known as Senegalese twists, because of the instant definition the style gives my face. It’s a flattering hairstyle that complements my eyes and cheekbones. In the winter of 2009, I asked my friend’s wife, who was a great braider, to braid my hair into micro (tiny) twists and she agreed. The braiding process, which took place in my parents’ basement, was tedious and lasted for more than 20 hours.

Once the style was completed, I looked and felt like a princess, and nobody could make me believe otherwise. For the next several weeks, I rocked my long twists in high ponytail styles. The generous compliments from both men and women came almost daily.

Since I wanted to preserve the beauty of the twist style, I opted to have my hairline touched up (the process of re-braiding only the front hair section or around the circumference of the head) after eight weeks of wearing the style. After I had worn the twists for almost three months, it was time to take them down. As I took the twists out in the front of my bathroom mirror, I noticed several bald spots had appeared on my hairline. Besides, the little hair left there had become thin. I was scared! I, however, brushed away my fears because I believed the hair would grow back thick, as the rest of my hair still was. Several years later, my hairline was still very thin with the bald spots persisting. I was suffering from traction alopecia. I could no longer wear braids or any style which would expose my hairline. Needless to say, I was sad and embarrassed! Baldness, also known as alopecia, is a problem faced by men and women and may arise from various causes. When it is due to excessive pulling or traction on the hair, it is termed traction alopecia. This excessive pulling has been associated with the influence of cultural, religious and occupational practices on hairstyling in men and women.

People have known about the problem for at least a century and even though it has been described amongst various populations, it appears to predominantly occur amongst black women. That’s why we should understand all we can about hair loss. Do braids cause hair loss? Unfortunately, the brains, cornrows, and twists of our cultural heritage can do some damage.

We wear braids because they are low maintenance and look amazing. Furthermore, they reduce the requirement for chemical treatment, aka relaxing, of hair. But there are drawbacks that can be devastating. Though more common amongst women, traction alopecia is also seen in female children.

Hairstyles in which traction alopecia commonly occurs include the previously mentioned braided hairstyles, braid extensions, dreadlocks, and weaves, especially when they are worn for prolonged periods. Even though these hairstyles can cause this kind of alopecia on their own, wearing them on relaxed hair increases the risk of developing the problem. Also, wearing braids or cornrows with extensions is more associated with hair loss than wearing them without extensions. Other hair-wearing behaviors that cause traction alopecia include wearing wigs incorrectly, wearing hair in tight ponytails or buns, and the prolonged use of pins to hold headgear onto the hair. Since the main problem is the traction, wearing some of these hairstyles loosely ought to reduce the traction and consequently, the hair loss, particularly when extensions are not used, and the hair is not relaxed.

Traction alopecia typically affects the margins of the scalp (also known as edges), usually occurring more in the front than at the back, but may occur on any part of the scalp, and even the jaw in men, where prolonged traction is applied to the hair. Affected women may be impacted psychologically and may have their quality of life reduced. People have used techniques that hide hair loss to solve the problem. These camouflaging techniques include mascara and wigs. Treatment options for traction alopecia include topical medication and surgery to transplant hair follicles into the bald areas.

Wigs are a practical solution to traction alopecia, and indeed, other types of alopecia such as alopecia areata, telogen and anagen effluvium, and androgenic alopecia. Wigs are less traumatic, complex and expensive than the available treatment options. While they will not grow back the lost hair, using them correctly helps to prevent further loss (and initial loss for those who haven’t lost their edges hair yet). And for those whose edges are so bare that treatment is required, wigs can be a stopgap measure until they can get the treatment.

Braided wigs will remain a viable alternative to braided hairstyles for women who want to prevent or limit hair loss at their edges, save time from the long hours of braiding and reduce the cost of getting braids. Black women can, therefore, still celebrate their cultural heritage by wearing a braid, cornrow, or twist wig without suffering the effects of having their hair braided.

My Road to Recovery

It’s now been over a decade since I experienced the traction alopecia, and I’m grateful to God because though my edges are still not back to being full, they are significantly better than what they were in 2009. I have realized that multiple hair practices contributed to my loss, though getting the tiny braids was a major cause. Interestingly, I still rock micro (tiny) twists frequently, but when I wear them now, the twists are not made on my hair, but rather on a wig.  When I wear wigs, I take extra measures to ensure my hair and edges are is well protected and moisturized. To keep my hairline free from any tension, I wear one of my favorite beauty essentials, the wig grip, underneath all my wigs. I am keeping my edges safe, and I hope you are keeping yours safe as well. I guess you’re wondering what steps I took to grow my edges back. In a subsequent blog article, I will share these with you, so, stay tuned!

Are you experiencing traction alopecia? I would love to hear from you. Comment below, or contact us at Instant Arẹ̀wà Hair if you’d like help choosing a wig. And if you want to know more about my recovery from traction alopecia, read my follow-up blog about growing back my edges.

I love my knotless box braided wig. However it was the wrong color. It should have been a 1B/27 not sure the exact color I received but it was not the color ordered. I kept the wig since it took so long to get. I have made other wig purchases since but I will absolutely make sure it is the correct color before I decide to keep it this time. Even if it takes 2-3 months to send and receive it this time. Your company makes very realistic braided wigs I will give you that. So make sure you double check your wigs upon receipt. 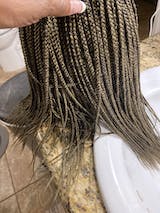 The wig is lightweight came in a timely manner no smell at all nice packaging looks exactly like picture. Have not worn yet will post when I install it. Got many compliments on other wig I purchased this is the. Company for all your braid wigs don’t spend hours and money for the same result this wig can give and with proper care will last you at least 1 year

D
Headband Wig DONNA (Secaucus, US)
Looks like my hair

First, shipping was really quick. The wig is light on my head, and looks like how i would style my hair. People think it's my hair. I like the quality and I Plan on ordering another wig similar to this one or with another color headband. I really like this suit.

This wig is amazing!! It smelled so good out the box. I have not installed yet, waiting to go on my cruise in July. Customer service was great. I will definitely be making another purchase.

I have now purchased two wigs so far! Both are very beautiful! The locks and the box braids! I will be purchasing again! I love them both!